The ostentatious limousine pulls up and out steps the starlet. As the cameras flash, she flashes her smile and diamonds and slowly 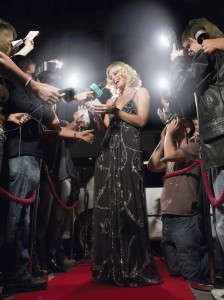 walks towards the cinema for the premiere of her latest movie.

Every inch of the way she is on show. This moment has taken hours of preparation, with her stylist, publicists and hairdressers fussing around to get every detail right.

As she turns and gives her final wave before entering the building, the last thing she’ll be thinking about is the red carpet she has just walked along. But that carpet is what has made the occasion special. It has been her stage. It is what has magically transformed the starlet from young actress to celebrity!

Yet, what an odd custom to a lay a carpet on a pavement for such an occasion and why red?

By tradition, kings, queens and emperors proceed along red carpets to their coronations. When heads of state arrive in foreign countries for official visits the red carpet is an essential protocol. It might stretch for many metres along the tarmac at the airport and right up the aircraft steps.

To give someone the red carpet treatment is a phrase that has gone into the English language. It means to welcome someone with all the respect and dignity required to emphasise their importance.

In ancient times it was only the Gods who were permitted to walk along red coloured roads. It signified their deity, as the lifeblood of mortals lay beneath their feet.

Two and a half thousand years ago a Greek legend was written down as a verse drama. It told of how, when Agamemnon returned from the Trojan Wars, his wife Clytemnestra rolled out the red carpet. She ordered her attendants to lay out a richly coloured tapestry for her husband to walk on as he descended from his chariot. ‘Let not the proud foot, that trod down Troy touch the Earth,’ she said.

Agamemnon was very wary, and so he might be as he was about to be murdered by Clytemnestra and her lover. ‘A mortal man to set his foot on these rich dyes? I hold such pride in fear. Honour me as man, not a god.’

Throughout the history of art, red or purple have been the colours used by artists to denote power and wealth and in many great historical paintings artists have depicted rich carpets for important or scared figures to walk upon.

One of the first cases in more modern times of a red carpet being used to welcome a political leader dates from the early 19th century when one was rolled out to greet the USA’s fourth president James Madison on an official visit.

Red Carpets have played starring roles in films as well as at film premieres. Probably the most famous example is found in the Charlie Chaplin classic, The Great Dictator. It is a barely disguised spoof on the self-importance of the Second World War European dictators and contains a wonderful scene involving a red carpet welcome at a railway station and a train that can’t quite stop at the right point.

Should the red carpet treatment go wrong, it is not just injurious to pride. The wind was so strong when Pope Benedict’s plane was due to arrive at Edinburgh airport in 2010 that the red carpet was in danger of being lifted off the ground. It had to be removed in the interests of safety and the pope had to forgo the usual symbolic VIP welcome 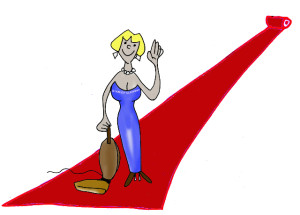 On glitzy Hollywood occasions, the red carpet ritual can take hours, with each mega-star, celebrity and wannabe being allocated their time. Blasé mega-stars will waft between the crowds and cameras as if it is all beneath them. Professional celebrities will oblige with poses at every angle. Wannabes will milk the moment and hope someone will want to take their picture. In show business the red carpet is the stage for maximum self-publicity. Comedian Sacha Baron Cohen arrived at the Oscars in 2012 dressed in mock military uniform carrying the supposed ashes of Kim Jung Il, which he proceeded to spill on the red carpet. He explained that it was what the late North Korean leader ‘would have wanted’.

And then it is all over. The unsung heroes of the night emerge with their vacuum cleaners, to do their work, clear up the ashes and detritus of the evening, and then roll the carpet up and take it away in a van for storage until the nest occasion when it will be laid spotless and unblemished for a new starring role. Another premiere, a VIP visit, a wedding… who knows?

Starlet Cleaning offers the best professional carpet cleaning London services in the capital. To give your floors the red carpet treatment please contact us for a free quote.