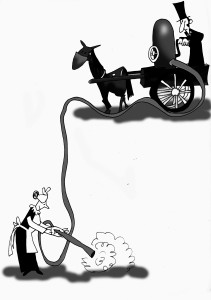 The traditional besom had two uses, at least in the hands of a witch. She could use it to sweep the dirt floor of her hovel or she could fly on it over the mountains to meetings of her coven.

It is difficult to imagine the besom’s more hi-tech and efficient successor, the vacuum cleaner, being used for anything other than its original functional purpose.

In former times the besom was a cheap and easy tool to make. A good stout pole was chosen, usually cut from an ash coppice, and a bundle of tough but flexible twigs was tied to the base. These could be of birch, or the yellow flowering shrub known as broom. If the latter, it became known as broom-besom, later shortened to broom. And the ash pole became known as the broom handle or broom stick.

Modern day witches, not Hallowe’en hags with pointed hats, but followers of the recently revived Pagan religions, use the broomstick in their rituals. At a wedding, known as a hand-fasting, the bride and groom ceremonially leap over the broomstick to start their new journey together.

Back home the modern witch is far more likely to substitute Hoover or Dyson for broomstick when it comes to domestic chores. Yet vacuuming is a very modern science compared with witchcraft.

The principles of suction now used to lift dust and dirt from carpets has been known about since time immemorial. Cave dwellers probably used the hollow stalks of grasses like drinking straws to sip water or forage for edible grubs! It was however only with the invention of mechanical suction that the vacuum cleaner became possible.

Up until then carpets could only be cleaned by lifting them, hanging them outside on a dry windy day, and beating them furiously until the dust came out in clouds and blew away. The below-stairs teams of housemaids beavering away in the grand country houses in former times had no access to labour-saving devices. Their lot was backbreaking drudgery with brooms, dustpans and carpet-beaters, hard soap and polish, and a half-day’s rest on Sunday – if they were lucky!

In medieval times only the very rich had carpets, and they were often so beautifully woven that they were displayed on the walls as works or art, rather than trodden underfoot. The floors were instead strewn with rushes. They absorbed the debris of daily living and were from time to time, probably once they started to smell, swept up and replaced with new.

The world must once have been a very mucky place. So when the vacuum cleaner came along – there was a ready and eager market for it. The mechanical cleaner was only possible thanks to the technological advances of the industrial revolution. At the same time the dust and soot produced by the factories of the new industrial age increased the need. Factory smoke penetrated the doors and windows of houses and air-born particles got lodged in carpets and fabrics.Inns and public houses used sawdust in the same way. It absorbed all the beer that slopped over and could be swept up once saturated.

The very earliest vacuum cleaners were cumbersome machines and the ‘Whirlwind’, which was invented in 1869 by Ives McGaffey from Chicago, had to be cranked by hand.

Thirty years later a petrol driven version was produced, although it was not a neat machine that could be stored in a cupboard under the stairs, but had to be brought to the house every time on a horse drawn cart.

By 1901 an electrically powered version was available. It too however was large and cumbersome and the dust was sucked up by a 100-foot long pipe. Crowds gathered to watch it in use and when some public buildings, such as theatres, were first vacuumed they exposed and removed the dust of ages by the ton.

In 1905, a device with the snappy title of the ‘Improved Vacuum Apparatus for Removing Dust from Carpets’ was patented in Birmingham. It could, so the boast went, be used by ‘one person (such as the ordinary domestic servant)’!

A century ago the portable electric vacuum cleaner had certainly arrived, but was far from being a popular household item.  Some of the earliest vacuum cleaners weighed as much as man.

Enter James Murray Spangler. He was an inventor from Ohio who suffered from asthma, so had a special interest in ridding the environment of dust. In 1908 he patented what would today be recognized as the first user-friendly cleaner. He sold his patent to a certain William Hoover who seized the business opportunity.

The vacuum cleaner age has lasted about a century. Over that time the gadget has become essential to small and large-scale cleaners alike. Various manufacturers have gone into the business of producing them and added their own refinements. Marketing too can claim a lot of the credit for their popularity. Hoover’s slogan, ‘It beats as it sweeps as it cleans’ has gone down in advertising history as one of the classic slogans.

In the last 20 years a new player has come on the scene, James Dyson, who reinvented the vacuum cleaner. But it is William Hoover whose name has gone down in history. Nobody thinks of giving the house a quick McGaffey or getting the Spangler out to vacuum the stairs.

But whatever the name given to the process, the ancient witches, if they could see a modern vacuum devise in action, would be amazed. They would swear it was cleaning as if by magic!