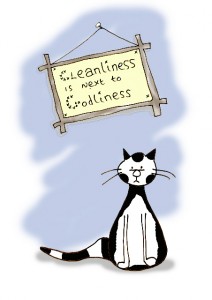 Godliness’. Samplers were often framed and hung on a parlour wall. The words encapsulated an age-old idea that to keep oneself and one’s home spick and span was a sign of moral virtue, while to live in a mucky, slovenly environment was evidence of a degenerate personality.

The idea is well established in the way we speak. For instance, when someone uses ‘filthy’ language, it is not literally unhygienic, but it is vulgar, coarse or inappropriate. And then there are ‘dirty’ jokes; or people having their reputations smeared; there are many expressions that have their origins in cleaning, or rather lack of it, but have now found a wider meaning.

In many religions there is a direct connection made between physical washing and spiritual purity. Before prayers a Muslim is expected to perform ritual ablutions. Mosques have a washing area with running water where the faithful may prepare themselves. This formal washing, known as wudhu, starts with the hands and includes the arms, face, feet, head, mouth and nostrils.

In the Christian tradition the priest symbolically washes and dries the hands before consecrating the bread and wine of Holy Communion. In many churches a server attends at the altar holding a silver basin and clean towel for this purpose. On Maundy Thursday there is a tradition that celebrates the Bible story of Jesus washing the feet of his disciples. A priest or bishop washes the feet of his congregation. And it is not a token wash, but one done with soap, hot water and due thoroughness. At a baptism water is used to wash away sins. If a baby is baptised a few dabs of water from a font will be sufficient. An adult however may opt for baptism by full immersion. Many chapels have a special baptistery that is filled with water and in which two adults can stand – the minister and the candidate for baptism. Pilgrims to the River Jordan often choose to be re-baptised at the same spot where traditional maintains that St John baptised his cousin Jesus.

Hindus lay great store by the rituals of bathing. Like Christians many Hindus aspire to wash themselves in a sacred river, in their case the Ganges that flows through northern India. The river can make no claims to being physically pure, but in terms of spiritual importance it is unsurpassed.

In the Old Testament the Jewish laws laid great emphasis on ritual cleaning. To wash in a mikveh involves covering the entire body in water. Some of the rules of cleanliness that were established way back in Jewish history were purely symbolic, but others had a practical purpose such as those involved in handling a corpse or relating to skin disease.

Hygeine rules governed everyday life. Even today Orthodox Jews are careful not to wash plates that have held meat alongside those that have contained dairy products. For a home to be kosher it is not enough for the right foods to be eaten at a meal, the washing up afterwards needs to be done with equal care. Many Jewish kitchens have two very distinct sinks to ensure no mistakes are made.

Cleanliness in religious terms can be significant in one of two ways. On the one hand the process of washing, if done in a prescribed manner, is an obligation that to ignore would be sinful. On the other hand the act of cleansing removes the stain of sin and guilt.

In the secular world many businesses know that to present themselves in an untidy manner is poor practice that ultimately undermines customer confidence. Who would want to trust themselves to a dentist whose surgery looks as if it needs a good going over by the cleaners? And while it might be acceptable for a working garage to have oily rags lying on the floor, a mucky car show room presents a poor image. It suggests carelessness – with the implication that if the show room is carelessly maintained, then the cars too might be in need of attention?

Any profession that prizes attention to detail scores an own goal if its office looks neglected – if carpets are stained, paint scuffed or glass smeared.

Appearances are always important. In a religious context the faithful want to appear before God in prayer at their best; washed, tidy and in their smartest clothes. In the world of work it is clients and customers who are important and have to be impressed.

It is well known that people make snap judgements that are frequently based on first impressions. Who knows how much business is lost by companies as a result of presenting themselves badly? A clean office or sales room implies efficiency. But because, as a result of centuries of religious heritage and tradition, cleanliness is associated with virtue, more than efficiency is suggested by an orderly place of work. Honesty and reliability are also implied. So the value of a neat, ordered and spotless office can never be underestimated.